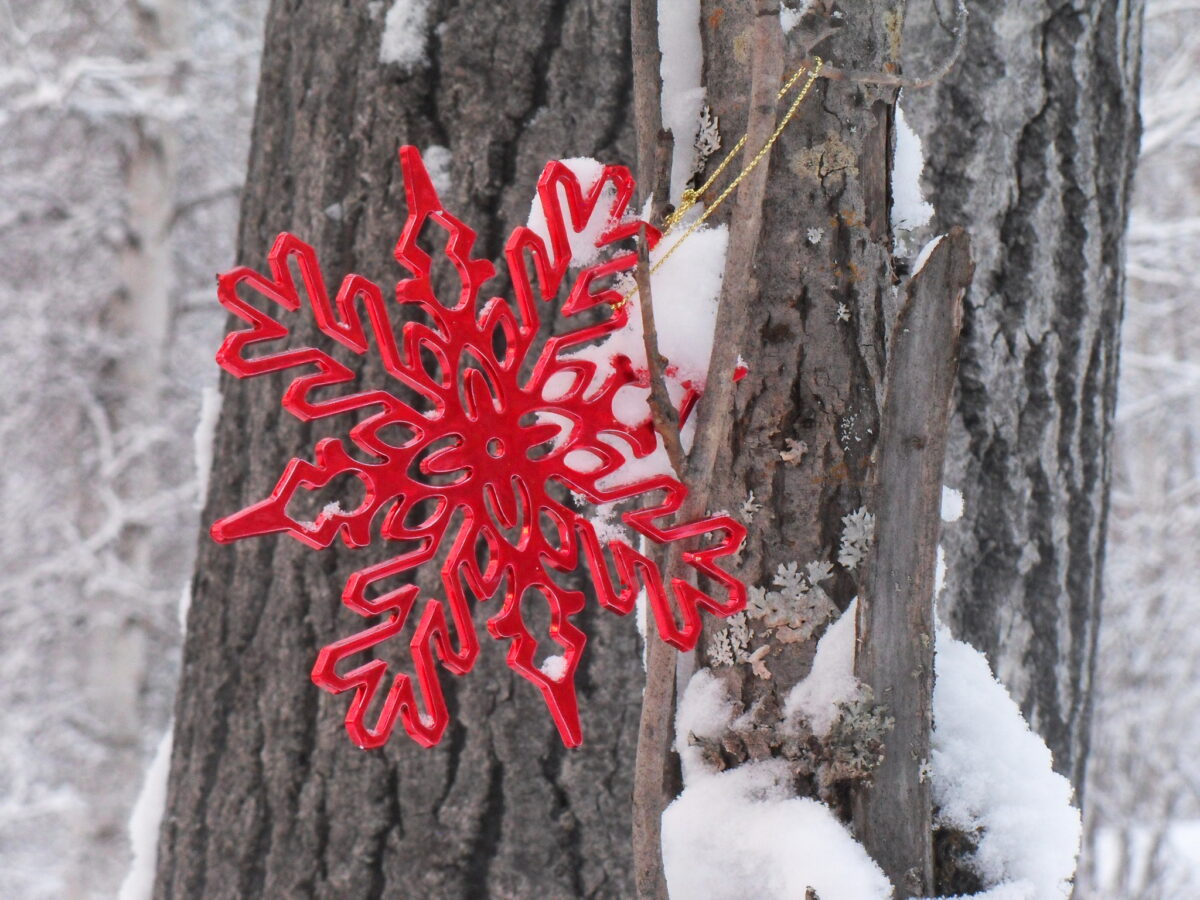 I think we can all agree 2020 has been a dumpster fire we’ll all be glad to see the end of, but December has brought brightness as well. We had a very pleasant, quiet Christmas, and here on the north side of the world, we’re on the brighter side of the solstice now, with more light coming back into the world every day.

We are having an incredibly bright full moon with brilliant clear skies, and the moon on the snow is like a wan sort of daylight, casting clear shadows at midnight.

You couldn’t quite read a book out there, but it’s close.

I’ll have a post up in a day or two with a full rundown of my books from the past year (including some freebies and sales!). In the meantime, I hope you’re not having too rough a time with these last days of 2020. Realistically, the arbitrary switchover of the calendar doesn’t make that much difference, but there’s something in us that likes milestones and fresh starts. Here’s to a better 2021.

… and the country gave us Election Day 2020. I voted for the first time when I turned 18; I still remember how excited I was about it. I haven’t missed an election since. I’m older now, a lot more jaded (especially lately) but I still believe that voting is the way you wish the future into being.

It’s -25F and the world is still beautiful.

Today we hiked over to check out where the beaver lake used to be until about a week ago. We found many fascinating things, such as: fallen trees! Mud! Holes!

… maybe you had to be there.

There were also some obvious channels dug by the beavers in the bottom of the former lake. I can’t really think of a natural process that could have made these.

Here’s basically the same view as above, but from a week ago:

Meanwhile, the creek is just back to being a creek, now running between 4-foot banks of mud that were deposited on the lake bottom.

And so many gnawed trees. So many. Beavers … why are you like this.

With this one tree along the (former) lake shore, they also ate its roots and dug around it, making it look weirdly like a cutaway view of a tree.

And I found a chokecherry tree growing wild, with some fruit on it:

And I got a (slightly) better picture of this cottonwood tree that’s gnawed through to the point where walking around it is kind of … uneasy.

It was a nice walk, but I miss the lake and really hope the beavers are okay. We’ve been leaving the area around the beaver house alone and trying to be quiet when we’re out looking around, hoping not to spook them off. They might’ve left for greener, damper pastures, though.

Sorry. I couldn’t help myself.

So, for background, we live out on the highway with a creek in our backyard. Adjacent to our property, there’s a section of the creek that’s been intermittently occupied by beavers ever since we’ve lived here. It was unoccupied for a while, but a couple of years ago a new set of beavers moved in and rebuilt the old dam. We didn’t see them for most of the summer, but their dam-building ways kicked into high gear this fall, and we’ve been enjoying going out and looking at them, checking on the progress of the dam and watching them swim around, dragging branches from place to place, and preparing for winter.

Their pond start out small, but has been growing in size, rearranging the creek’s course and reconstructing that entire section of creek. It’s been really fascinating to watch.

They’ve done an astonishing job of clearing out the trees in what used to be a wooded patch of valley and is now basically a lake, including gnawing through 50-foot cottonwoods.

It’s fun though – I mean, they’re cute, they’re not bothering anyone, and we like going out in the evening to watch them.

I don’t have very many pictures of the actual beavers because they’re usually seen from a distance and mostly swimming, so it’s just beaver heads. We’ve been trying not to go too close so as not to bother them. They seem to be largely unaware of us; they’ve never seemed to mind us being there.

Tonight, however, I went out for my evening tour de beaver, and the lake was … GONE?!!

We worried at first that someone had actually done it – destroying beaver dams is a thing that happens, sometimes out of necessity (because they do tend to build their dams in places that can threaten human infrastructure like roads). But we’re pretty sure the dam simply collapsed under our recent rains, especially since the beavers are fine. We saw three of them out there, busy trying to rebuild.

So hopefully they’ll be okay. It’s late in the season for it, but they still have the creek and plenty of food, and they also still have most of the previous dam. I wouldn’t be surprised if they’ve managed to rebuild a tidy little lake by the time things freeze up.

While August and early September often bring heat waves in more temperate parts of the country, here in the North late summer is slipping rapidly into fall – gold patches in the trees, the last of the ripe berries, a crisp dead-leaf smell in the air.

Rogue Myths and Echo City are cranking quietly along. I’m donating half the proceeds from the first two months of Rogue Myths, which comes out to about $210, to a couple of charities.

I got the edits back on Hollow Souls from my beta readers, so that’s easily on track for its Sept. 29 release.

I’m really looking forward to fall and Halloween this year. I love autumn, and all that goes along with it: the colors and crispness, the smells of woodsmoke and dry leaves, the return to sweaters and hot drinks and comfort food. In these Plague Times, when there’s no travel, no visitors, and my husband and I are both working from home, we need those little things to break up the routine and make each part of the year fresh and unique.

I hope that you and yours are safe and healthy, as this most difficult of years heads into Northern Hemisphere fall.

City of shadows.
City of monsters.

Echo City, Gatekeeper #2, is out this week on Amazon!

Art student and reluctant paladin Kay Darrow thought that being life-bonded to a magic sword with its own agenda was the worst thing that could happen to her.

Turns out she was wrong. Because now there’s a city after her.

Not the people in the city. The city itself.

Welcome to New York. But not the one you know.

Get it on Amazon!

Our summers are so short here. It seems like summer has hardly begun, and then you look up and realize that a chilly undercurrent has crept into the nights, there’s a hint of that sharp autumn scent, and a few patches of yellow have begun to appear in the trees. I love autumn – it’s my favorite season – but I’m not ready to let go of summer yet, especially as it’s been a cool, rainy one, so it hardly feels like we’ve had much of a summer yet.

But there are plenty of compensations, like this afternoon’s rainbow …

Or the little moose family that came through our yard a few nights ago.

I turned 44 in July, and enjoyed an extra-tall, frosted and decorated mini birthday pancake in lieu of an actual cake, provided by my Lovely Spouse.

Here’s a sampling of some of the stories I’ve sent out over the last few months:

I released a novel in July, Rogue Myths. The sequel, Echo City, will be out this Tuesday!

I hope you’re having a good summer – or a good winter/spring if you’re in the Southern Hemisphere! I’ll leave you with this playful little selfie of me and my delphiniums, after I realized I had accidentally dressed to match.

(Above photo: I made a new friend. Literally. I think I’ll call him Wilson.)

Well, this isn’t where any of us thought we’d be even a week ago, let alone a month ago.

But we keep on going. I now have my weekly short story mailing list underway – a free story every Tuesday. If you’d like a little piece of escape delivered to your inbox once a week, sign up here!

As for the rest of it … I keep thinking, if there’s one thing I wish I could take forward with me from all of this, it’s a renewed awareness of scarcity, and habits for dealing with it. We already lived frugally, I thought, but now I find myself using a dish towel to mop up spills rather than paper towels, and rewashing plastic bags to use again. We’ve started a compost bucket, something I’ve intended for ages but somehow never got around to. I’m thinking about stepping up my gardening plans, not necessarily to grow more food, but to make my garden more self-sufficient and sustainable and environmentally friendly.

… oh no wait, there are two things. The other thing all this has brought home to me, in a very visceral way, is how interconnected everyone is.

I already knew that, intellectually; I think most people do. But there have been so many examples, through all of this, of people stepping up to help each other. And it’s one thing to know on a purely technical level how much we rely on the people who sell us our groceries and clean our buildings and drive our delivery trucks. But in this new world, they are the front-line first responders, putting their lives on the line every day to make sure we get the things we need to be healthy and safe and comfortable.

And also, facing the possibility of being socially isolated makes you realize how many small, friendly interactions you have with people every day.

It’s a strange, scary time. Take it easy on yourself, and take care of each other.

This week’s story is “Hetsie’s Wonders,” a Weird West story that appeared in the now-defunct SF magazine Crossed Genres in 2009. If you’re not on the list, you can click the image or download it from this link:

Next week’s story will be a flash fiction about an accidental kitten acquisition, short enough to paste into an email for easy online reading. Join the mailing list and don’t miss any!